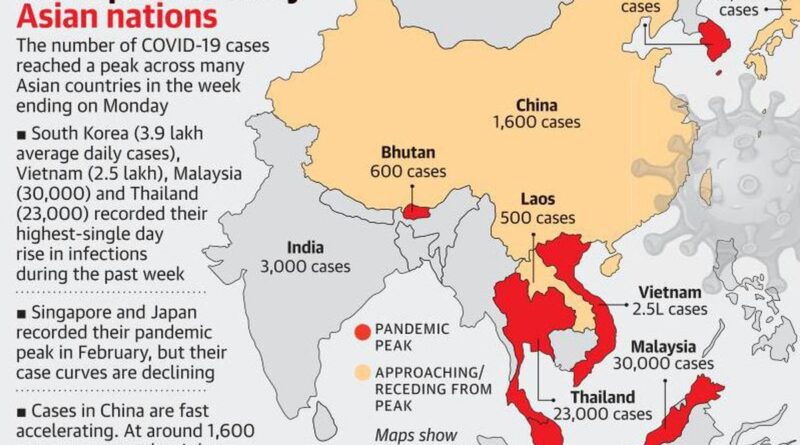 As the coronavirus pandemic seems to be tapering in India, with daily infections falling to the lowest levels since May 2020, the picture does not reflect similarly in a few other countries in Asia. Besides, the World Health Organisation has raised alarm about a global uptick in cases owing to the Omicron variant, its new sub-variant BA.2 or ‘Stealth Omicron’, and countries around the world gradually lifting COVID curbs.

On Tuesday, the WHO said global cases had jumped by 8% compared to the previous week, with the biggest surge in the “Western Pacific” region or in South Korea and China. Cases in the region rose by 25% and deaths by 27%.

On Thursday, South Korea reported an unprecedented, record high number of daily COVID-19 infections and deaths, as the country is set to lift virtually all social distancing curbs in the coming days. The country’s authorities said 6,21,328 new cases and 429 deaths were reported on Thursday.

The Korea Disease Control and Prevention Agency (KDCA) said that behind the record surge was the highly infectious Omicron variant.

The current figures are far higher than what was predicted by South Korea’s health authorities. On March 16, the government had said it expected the recent wave to come to head with daily infections in the mid-4,00,000.

Even as cases surge to record levels, the South Korean government has decided to go ahead with lifting almost all social distancing restrictions in coming days and weeks, with public opinion seemingly supporting the decision.

Vietnam has also been seeing a record surge in daily infections, reporting nearly 2,00,000 cases daily for the last few days. On March 17, according to its Health Ministry, Vietnam recorded 1,78,112 new infections. Nearly 1,80,000 cases were added to Thursday’s count as two provinces added new unreported cases from the previous couple of days. Seventy-six fatalities were reported on Thursday.

According to WHO data, South Korea has added the second highest number of COVID cases to the global tally in the last seven days, with 17,76,045 cases.

Even as cases are surging, the country’s administration announced on Wednesday that it will be doing away with international quarantine and other travel restrictions for foreign travellers, meaning the country would be opening its borders completely after two years. Foreign visitors, however, will have to provide a negative test report upon arrival.

Facing its biggest outbreak by far since the pandemic began, China on March 14 reported 3,507 new cases — double of what it had reported on the previous day.

Most cases in China’s new surge are coming from the northeastern province of Jilin, which reported over 700 symptomatic cases on March 16 and over 1,400 on March 15, having to establish makeshift hospitals in the last few weeks to deal with the surge.

In the wake of the current outbreak, Chinese President Xi Jinping said on Thursday that the country would stick to its “zero-COVID strategy” — a mix of strict border controls, targeted lockdowns and long quarantines. China has not reported any COVID-linked deaths for over a year.

The surge in China follows the unexpected COVID crisis in Hong Kong since February. Hong Kong reported over 21,000 new infections on Thursday, with daily cases hovering around 20,000 to 30,000 in recent days. The city has reported over 3,500 deaths in this month alone. 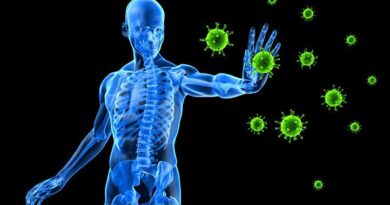